THE SOCIAL ENTREPRENEURS IRELAND AWARDS HAVE UP TO 350,000 EURO IN FUNDING AND SUPPORT AVAILABLE FOR PEOPLE WITH THE BEST IDEAS TO MAKE IRELAND A BETTER PLACE TO LIVE 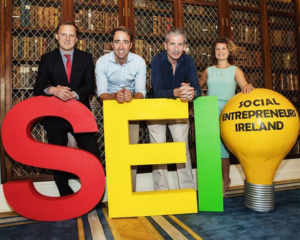 SOCIAL ENTREPRENEURS IRELAND has launched a call out for people across the country with ideas to tackle social issues in Ireland to apply for funding and support as the 2018 Social Entrepreneurs Ireland Awards, supported by DCC plc, opens for applications.

Interested candidates are asked to log on to socialentrepreneurs.ie to apply and find out more about the Social Entrepreneurs Ireland 2018 Awards programme which includes a whole range of support for social entrepreneurs from start-up to scale-up.

The Social Entrepreneurs Ireland Awards have grants and supports for existing businesses and early-stage start ups ready to take their ideas out onto the commercial stage. The main proviso being that your idea should help to tackle social issues in Ireland.

There will be up to 8 winners in the Awards category, which supports people with existing projects aimed at solving a social problem. The Award is valued at 25,000 euro, with 10,000 euro in direct funding.

Previous winners of funding and support also include FoodCloud, which has to date delivered over 25 million meals to people in need; The Irish Men’s Sheds Association which now has over 400 sheds around the country, working with more than 10,000 men every week; and CoderDojo, which has been a worldwide success.

Submit your application before the deadline of 5pm March 20th 2018. No late submissions will be accepted.