Waterways Ireland is planning a year of events to commemorate the 25th Anniversary of the opening of the Shannon-Erne Waterway. This was the first and one of the largest cross-border infrastructure projects of its time, tlinking the Shannon In Ireland with Lough Erne in Northern Ireland. The opening created not only a fluid link between the two countries but opened a channel for cross border travel, communication, recreation, business and community engagement. Much has been gained by these communities over this time period.

T​​he Shannon-Erne Waterway was known as the Ballinamore and Ballyconnell Canal and opened in 1860. Re-opened in 1994 after restoration, it is 63km of river, lake and still-water canal. It takes approximately 13 hours to travel and is known as the location where Ireland’s ‘little people’ originate!

The waterway has opened a countryside which few had ever seen and over the past two decades this tranquil stretch of water has grown in popularity, particularly in the towns and villages along its length. Cruisers and barges move freely along its waters, mooring up in some of the six fully serviced public marinas found along its length. Sixteen locks are managed electro-hydraulically by a smart card which helps ease passage through the locks.

As part of the Anniversary celebrations and to encourage people to use this cross-border corridor, Waterways Ireland will be working with the a number of groups to animate the waterways throughout the year.

The Heritage Boat Association will take their boats to the Shannon Erne this year. Visitors can board the boats and walk alongside them as they pass through the many towns and villages along the Shannon Erne. 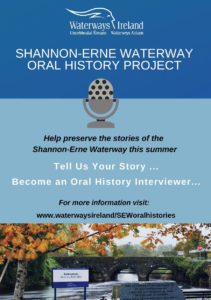 Waterways Ireland are also capturing the stories and memories of the Shannon Erne this year through an Oral history programme. This will run throughout the year. Do you have an interesting story or perhaps you would like to become an oral history interviewer? If so check out the Waterways Ireland Oral History project page – CLICK HERE.

Full training is provided for the interviewers.

Closing Date for registering as a volunteer: 15th May 2019

Volunteers must be over 18 years old. All volunteers will be required to attend the training session and be able to travel to locations for the recordings themselves. Reasonable travel expenses will be reimbursed.