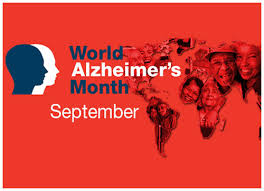 September is nominated internationally as World Alzheimer’s Month -Alzheimer’s disease is the most common type of dementia. If you are are planning any activities, events or initiatives in support of World Alzheimer’s month please let the Understand Together team know and they would be happy to promote them through their social channels and website. CONTACT: Fiona – (Fiona.foley1@hse.ie) or Roisin – (roisin.guiry@hse.ie)

If you are looking for dementia related materials you can order them free of charge on healthpromotion.ie. We would encourage you to also visit www.understandtogether.ie/get-involved/ to see how you and your organisation can take action.

The Dementia: Understand Together campaign has released the results of a nationwide dementia survey conducted earlier this year. The survey of more than 1,000 adults offers particular insights into dementia awareness, understanding and attitudes among the population at large since a similar survey was last undertaken in 2016. The results come against a backdrop of the number of people with dementia expected to more than double from 55,000 currently to 113,000 by 2036.

Professor Brian Lawlor, Consultant Psychiatrist and Chair of the Dementia: Understand Together campaign, wants to encourage everyone to take an active role: “This latest survey from the Dementia: Understand Together campaign points to clear progress in relation to people’s understanding of dementia since the last time a survey was undertaken in 2016, yet we can’t be complacent. Fear and stigma still surround dementia, resulting in unnecessary loneliness and isolation for people living with dementia and for their families. It can also result in delays in seeking help and diagnosis. This means that people may miss out on appropriate treatment, services and support as a result.”

From a social aspect, the results were very encouraging. More than half (55%) of respondents said they would not have a problem with their friends or family knowing they were showing signs of dementia, while 56% said they would not be ashamed or embarrassed of a diagnosis. Two-thirds agreed that they would personally like to spend time with a person with dementia and over half (52%) agreed that people with dementia participate in a wide variety of activities and interests, up from 40% previously.

Professor Brian Lawlor continued: “It is positive to see an increase in the number of people who are aware that there are things they can do to potentially reduce their risk of dementia – now at 52%, up from 46% in the previous survey. We all need to take a more active role in managing our brain health, by eating healthy, not smoking, avoiding excess alcohol, getting our blood pressure checked and treated, and by being active physically, mentally and socially.”

Mary Manning, Manager, National Dementia Office said: “We are so heartened to learn that following Dementia: Understand Together’s TV advertising campaign featuring the real-life stories of families living with dementia, more than half of respondents who saw the ads said that they were impacted as a result of the personal stories featured. Many feel greater empathy towards people with dementia and others have made a conscious decision to get in touch with, or visit, a friend or family member living with dementia, or who is caring for a loved one with dementia.

“We can all make a difference by understanding more and offering support to a friend, neighbour or family member who is living with dementia. I would encourage people to stay in touch. Drop by for a chat. Ask how you can help. Don’t underestimate the difference that your continued friendship and emotional support can make. I’d like to take this opportunity to say thank you to the families involved in the TV advertising that are inspiring people to take action to support people with dementia and their families in their communities.”

Pat McLoughlin, CEO, The Alzheimer Society of Ireland, added:
“Traditionally, dementia is an issue that has been hidden away. People in Ireland can sometimes still feel afraid or embarrassed about talking to people they know who have dementia. The Dementia: Understand Together campaign has helped to provide a platform to bring the subject of dementia into the public domain, and allowed awareness-building and perception-changing of dementia to take place. Having people speak about their own lives and experiences creates a better understanding of the unique experiences of people living with dementia. We need to be hearing and seeing more people with dementia and their families; they need to be more included in our society. There is no cure for dementia. However, many people who have dementia can do well and live well in their community and should be supported to do this. We want to create a society that is fully inclusive of people with dementia and their families and carers.”

The Dementia: Understand Together campaign, led by the HSE in partnership with the Alzheimer Society of Ireland and Genio, aims to create an Ireland that embraces and includes people with dementia, and which displays solidarity with them and their loved ones. The campaign website offers a comprehensive information resource on dementia, including a service-finder detailing county-by-county the dementia supports and services available. Support packs, including posters, leaflets and badges, can be ordered also. Visit www.understandtogether.ie or Freephone 1800 341 341.