In June 2017 all the Public Participation Networks (PPNs) across Ireland were asked to complete an Annual Report in respect of its activities in 2016, their first full year of operation. The result of this effort by the PPNs and the relevant local authorities is the Annual Report for 2016. By design, the report captures specific non-personal data and certain indicators relating to the activities of PPNs.

The Work of PPNs at National Level

Minister of State, Sean Kyne, remarked that this report “was itself clear evidence to the tremendous work that has been undertaken by PPNs in such a very short space of time.” PPNs are established in all local authority areas with some 12,000 organisations registered with them by the beginning of 2017. All indications show that this has grown during 2017. In Leitrim  this figure rose from 189 groups at the end of 2016 to 245 by Dec. 2017. 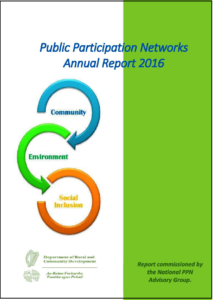 In summary these include:

Minister Kyne concluded by saying that “PPNs are the future. They are the main link through which the local authority connects with the community, voluntary, environmental and social inclusion sectors and they are uniquely placed to bring a diversity of voices and interests to the decision-making process.” He went on to encourage organisations that have not yet joined their local PPN to do so as soon as possible “to ensure that their voice is heard and that they play a role in the future development of their Public Participation Network.”

You can view and download the full pdf of the report by clicking HERE.

Please get in touch if you require further copies. Contact Leitrim PPN Resource Worker at info@leitrimppn.ie or by mobile