The Northern and Western Regional Assembly has prepared a Draft Regional Spatial and Economic Strategy, (RSES) following significant engagement and consultations over this previous 12 months. This includes the formal Pre-Draft RSES consultation that took place between November 2017 and February 2018. 124 written Submissions were received during that consultation process and were considered in the Directors Report to the Assembly Meeting in April, 2018. These consultations have helped shape the preparation of the Draft RSES. Links to relevant documents below. 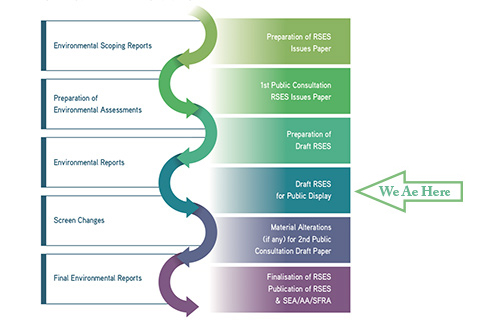 UPDATE – You are invited to discuss the Strategy on Tues. 29th Jan at 8pm in the Offices of Leitrim Development Company in Drumshanbo –

Written submissions or observations with respect to the Draft Regional Spatial and Economic Strategy and the accompanying reports may be made between 19thNovember 2018 and 5pm on 8th February 2019 (both dates inclusive) through one of the following media:

The Draft RSES has now been prepared, and it has been informed by an Environmental Report that has been prepared in accordance with the SEA Directive and the Planning and Development (Strategic Environmental Assessment) Regulations S.I. No. 436/2004 (as amended), accompanied by a Regional Flood Risk Appraisal Report. A Natura Impact Report (to inform the Appropriate Assessment) has also been prepared in accordance with Article 6 of the Habitats Directive.