Mr Seán Canney TD, the Minister of State for Community Development, Natural Resources and Digital Development launched the 2018 Annual Report of the Public Participation Network (PPNs) on the 25th September. 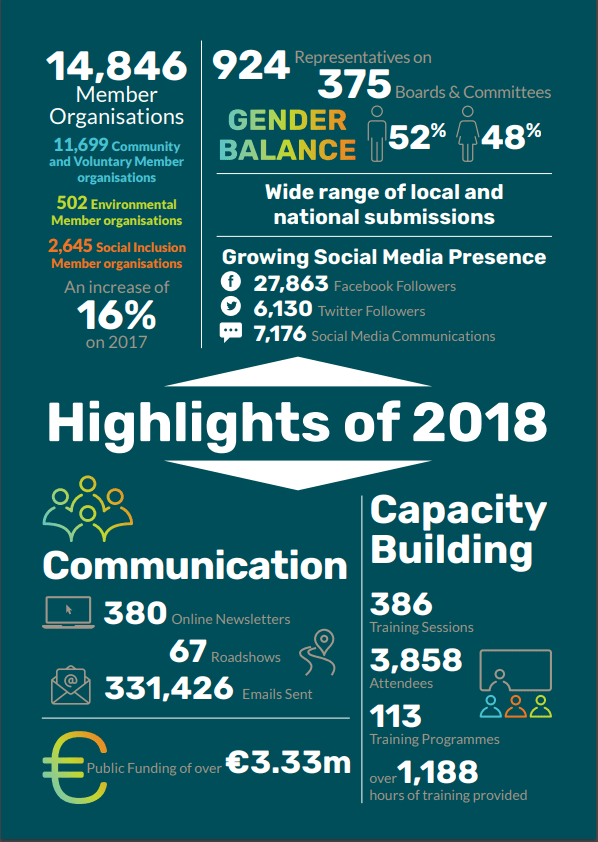 The Reports are available in both English and Irish. You can download the report by clicking the links below:

“Public Participation Networks allow local authorities to connect with community groups around the country and this third annual report gives a good indication of their growth in recent years. It also illustrates the diverse range of activities, consultations, engagements and commitments they undertook on behalf of their members in 2018. Engagement and consultation are core principles of citizen participation in local government and are key components of the work undertaken by PPNs.”

Growth of the PPNs

“In 2018 there was a 16% increase in the number of groups registered with PPNs in comparison with 2017. Increasing membership reflects what is happening on the ground and the positive impacts PPNs are having for their communities in such a short space of time.”

“The fact that there are 14,846 member organisations is indicative of a real success story. With some 920 representatives across the country on boards and committees of local authorities, not only is the voice of the local community being heard but that voice is actually influencing decisions on behalf of citizens.”

Outside their normal engagement, PPNs are acting in partnership with local authorities, and collaborated on a host of events and initiatives in 2018. These include; age-friendly initiatives, sports partnerships, community awards, disability awareness, men’s sheds, digital strategies and support of women’s groups. PPNs are also actively engaged in raising the awareness of the Sustainable Development Goals (SDGs) and are influencing local policy aimed at delivering on these goals.

“This is just a flavour of the diversity displayed by PPNs which the report covers in more detail. The involvement of PPNs in so many ventures, clearly points to the impact that the network is having and also to the reliance and trust so many place in the Network today.
“There can be little doubt, that the value of citizen participation in local decision-making has been directly enhanced by the development of PPNs. The energy, drive and commitment shown by PPNs, their workers, secretariat members and member groups, as outlined in the 2018 Report, is testament to their commitment to enhancing their local communities.”

In concluding, Minister Canney re-iterated the Department of Rural and Community Development’s commitment to the continued strengthening of PPN’s. He also congratulated the National PPN Advisory Group for their work in both the preparation of the Annual Report and their work with the Department in the development of PPNs.