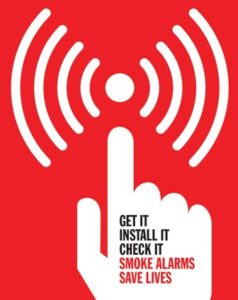 Under the community smoke alarm scheme, two 10 year battery operated smoke alarms (one Optical and one Ionisation) are provided to vulnerable homes in Leitrim who do not currently have them.

The Smoke Alarm Scheme does not include installation of the alarms. The Smoke Alarms are battery operated and need no wiring, but they need to be screwed into position (preferably to a ceiling) and full instructions are provided with the alarm. Applications are invited from individual households (for example older people, people with disabilities, lone parents and unemployed persons) who currently have no smoke alarms and are in a position to install the alarms themselves.

Voluntary groups/volunteers and others who visit people in vulnerable households, are asked to identify and assist people in applying for and installing the alarms.

Smoke alarms will only be provided to voluntary groups / volunteers / individuals that have completed an application form.  Priority will be given to households most in need given the household circumstances and their geographical distances from the nearest fire station.

A separate application form must be completed in relation to each household proposed to receive a smoke alarm.

You can download a copy of the application form HERE