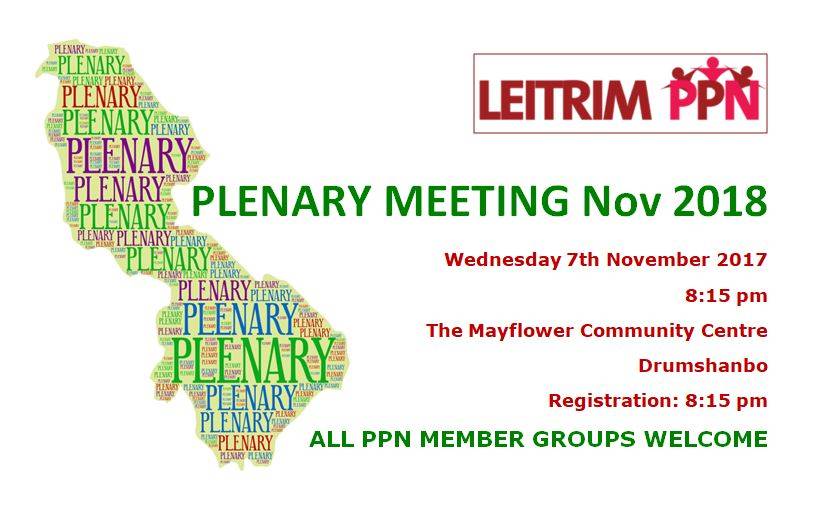 The Plenary, or general, Meeting of Leitrim PPN takes place on Wednesday November 7th 2018 at the Mayflower Centre, Drumshanbo at 8:15 pm.

This is slightly later than previously advised as the venue is being used up to 8:00 pm. Also, comments from the members regarding location of meetings have been noted. Drumshanbo is seen as a central location from most parts of County Leitrim.

There are two processes currently being undertaken that reflect exactly the work of PPNs that come about by your input and having representation:

1. Research on behalf of Leitrim PPN and in cooperation with Leitrim County Council into single-dwelling waste water treatment;
2. Development of PPN Policy position on Forestry in Leitrim for Council policy review.

Both items will be on the agenda for update and the Plenary Meeting sets the agenda for the coming months. Local Elections must also be held by June of 2019 and this will more than likely involve a review of standing representatives and possible changes for committees.

Nominations are being sought for Leitrim PPN Representatives for:

In the event of more than one nomination for any of the posts, an election will be held at Plenary.

All groups in the Carrick on Shannon Municipal District have one vote per group for a LEADER Rep.

All groups in the Social Inclusion college have one vote per group for the LEADER Youth Representative.

All groups in the Community & Voluntary college have one vote per group for each of the NWRDATF Reps if votes are required. 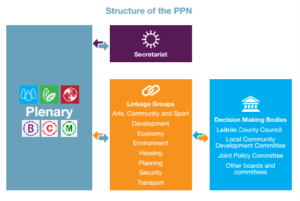 Should a vote on matters arising from the meeting other than elections be needed, each group has one vote on the matter.

A final agenda will be issued by week ending 26th October 2018. You are welcome to submit items for inclusion. The draft agenda is likely to include the following: