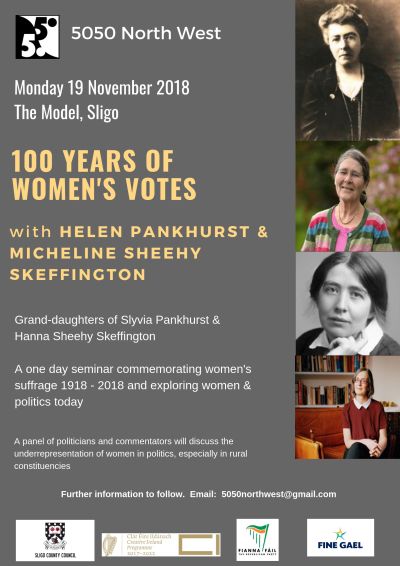 50:50 Northwest are hosting a seminar, 100 Years Of Women’s Votes commemorating women’s suffrage 1918-2018 and exploring women and politics today in the Model, Sligo, on Monday 19th November 2018.

Helen Pankhurst and Micheline Sheehy Skeffington, grand-daughters of Sylvia Pankhurst and Hanna Sheehy Skeffington, will be the keynote speakers at a day long event to commemorate women’s suffrage. A panel of politicians and commentators will also discuss women and politics today, with a particular focus on rural constituencies.
Additional information about the seminar will be released soon, in the meantime if you require additional information email 5050northwest@gmail.com

10.00am Registration and refreshments

10.30am Welcome and introductions

Helen Pankhurst and Micheline Sheehy Skeffington in conversation with

A panel will discuss women and politics today, particularly in rural constituencies, and will include:

Please note programme may be subject to change. A light lunch is included in the programme.

MARIAN HARKIN is an Independent MEP representing the Midlands-North-West Constituency of Ireland in the European Parliament since 2004. Her constituency encompasses 15 counties, Donegal, Sligo, Leitrim, Roscommon, Galway, Mayo, Cavan, Monaghan, Longford, Westmeath, Louth, Meath, Laois, Offaly and Kildare. Marian is a member of the Employment and Social Affairs Committee, a substitute member on the Economic and Monetary Affairs and substitute member of the Petitions Committees.

Her legislative work has included the EU Globalisation Fund, rapporteurship of the Employment Committee´s Opinion on Recommendations on the negotiations for the TTIP as well as following files on the Accessibility Act, the Disability Strategy and the framework agreement on parental leave.Currently Marian’s EMPL dossiers include the Regulation 2004/883 on Social Security, the creation of a European Labour Authority and the next EU Globalisation Fund, among others.

HELEN PANKHURST is an author, a women’s rights activist and an international development practitioner. Helen studied at Sussex University, Vassar College, New York, and Edinburgh University and has an honorary degree from Edge Hill University. She is a Visiting Professor at MMU and (from December 2018) the First Chancellor of the University of Suffolk.

Helen is a Senior Advisor for CARE International, based in the UK and in Ethiopia. She previously worked for other international development charities including WaterAid, Womankind Worldwide and ACORD. She is currently a Trustee of ActionAid.

The great-granddaughter of Emmeline Pankhurst and granddaughter of Sylvia Pankhurst, leaders of the British suffragette movement, Helen carries on the legacy. This includes undertaking re-enactment work for current-day awareness-raising including at the Opening Ceremony of the 2012 London Olympics, the 2015 film Suffragette, leading CARE International’s annual #March4Women event ahead of International Women’s Day in London and launching the Centenary Action Group. She has worked with the composer Lucy Pankhurst, on the lyrics of the Emmeline Anthem commissioned by BBC Radio 3 and in 2018 published the book: Deeds Not Words, the Story of Women’s Rights, Then and Now. @helenPankhurst

CAROLE COLEMAN is an RTE broadcaster. She currently presents and reports for This Week – Ireland’s oldest radio news show, on RTE Radio One each Sunday. Carole has held a number of positions in RTE including Environment & Education Correspondent and Washington Correspondent. She has reported from all corners of the world and is the author of two books on American culture and politics. Her writing has appeared in theIrish Independent, Irish Examiner, Leitrim Guardian and Leitrim Observer. Carole also supports local jobs and diaspora initiatives in her native Carrick-on-Shannon where she lives with her husband and two daughters.

Fiona’s work has been published in a number of leading political science journals and books, and she is co-editor of Electoral Management: Institutions and Practices in an Established Democracy (Routledge, 2017), Politics and Gender in Ireland: The Quest for Political Agency (Routledge, 2015) and The Road to 5050: Gender Quotas for Ireland (2012). Fiona’s work has been cited in parliamentary debates in Ireland and Canada. She has appeared before parliamentary committees in hearings on the electoral system and women in politics; addressed meetings of political parties, both at parliamentary and national conference level; and acted as State expert witness in the January 2016 High Court constitutional challenge to gender quotas in Ireland.

SINÉAD GUCKIAN, a native of County Leitrim, is an elected member of Leitrim County Council since 1999 and has held the position of Cathaoirleach on two occasions.
Sinéad holds a third level qualifications in a number of areas including, Information Technology, Fine Art and Purchasing & Materials Management. Having worked previously, in the public and private sectors, Sinéad has gained an understanding and an ability to deal with many of the issues we face today and is well equipped to ﬁnd solutions to these challenges. Sinéad is an active member of many of the voluntary organisations in her area and continues to be a strong representative voice for these groups.

NIAMH KENNEDY was first elected to Donegal County Council as an Independent Councillor in 2014. From Killybegs, Niamh is Vice-chair of Donegal ETB, Vice- chair of Donegal Joint Policing Committee and Vice-chair of Donegal MD Board of LYIT. She is also a member of two Strategic Policy Committees – the Planning and economic development committee and the Environment and fire services committee. Niamh is also Chairperson of Killybegs Community Employment Scheme and a board member of Aislann Kilcar. Niamh is a Director of Marine Fleet Electronics Ltd.

MARTIN KENNY is the Sinn Féin TD for Sligo, Leitrim, North Roscommon and South Donegal since the last general election in 2016. Before his election to the Dáil, Martin was a county councillor, co-opted in 2001 and retaining the seat in subsequent elections.

He is a native of Aughavas, Co Leitrim and is the father of four teenagers. As part of the Sinn Féin Dáil team, he is spokesman on agriculture, food and the marine and on rural and community affairs. He is a member of the Joint Oireachtas Committees in each of his portfolios. He was deeply involved in cross-community reconciliation work when the conflict in the North ended and worked supporting political prisoners after their release.

He is a fierce advocate for rural equality and introduced a rural proofing bill to the Dáil aimed at having all legislation and regulation reviewed to ensure that it does not discriminate against rural areas or rural dwellers.

MARC McSHARRY is a Fianna Fáil TD for Sligo, Leitrim, South Donegal and North Roscommon. He served as a Senator from July 2002 – February 2016 where through the years he served as party spokesman for the Marine, Finance, Health and Public Expenditure. His political career to date has included serving as a member of the Forum on Europe, and of Oireachtascommittees on Communications, Marine & Natural Resources, Health, and Finance; he has also served on the Committee of Inquiry into The Banking Crisis and on the Houses of Oireachtas Commission. He was elected to Dail Eireann in February 2016 and is currently a member of the Dáil’s Committee of Public Accounts.

CATHERINE MARTIN is the Green Party T.D. for the constituency of Dublin Rathdown since February 2016 and previously served on Dún Laoghaire Rathdown County Council. She is the Deputy Leader and Education Spokesperson for the Green Party/Comhaontas Glas. She is also the founder and inaugural Chair of the Oireachtas Women’s Parliamentary Caucus. Catherine organised the first ever International Congress of Parliamentary Caucuses in Dublin Castle in September 2018. She sits on the Oireachtas Education and Future of Mental Health Care Committees.

JOE McHUGH TD is Government Chief Whip and Minister of State at the Department of Culture, Heritage and the Gaeltacht with responsibility for Gaeilge, Gaeltacht and the Islands. Deputy McHugh was elected as a Fine Gael TD to represent Donegal in Dáil Eireann in 2007, 2011 and 2016. He previously was a member of Seanad Eireann 2002-2007. He served as Minister of State for the Diaspora and International Development 2016 to 2017, Minister of State for Gaeltacht Affairs & Natural Resources 2014 to 2016 having served as co-chairperson of the British Irish Parliamentary Assembly and Chairperson of the Joint Committee on the Implementation of the Good Friday Agreement. He lives in Donegal with his wife Olwyn and their three children.

SINÉAD MAGUIRE works as a solicitor with a strong human rights base, practising in the areas of mental health, child care and the environment. She was elected as a first time candidate for Fine Gael to Sligo County Council in 2014 and has been selected to run in the next general election. Sinéad serves on the board of the Hawkswell Theatre, Sligo Maritime Company, Sligo Jazz Festival and was the first female chair of Irish Central Border Area Network. Sinéad chairs the Local Community Development Committee, the Peace Committee and the Social Inclusion Activation Programme and is a member of the Sligo Economic Forum. She is married to local musician Kieran Quinn, they have two young children.

ALISON O’CONNOR is a journalist, broadcaster and author. Her work as a political columnist involves regular commentary on current affairs on radio and television. She has a weekly column in The Irish Examiner. She is a feminist.

MICHAEL HARDING is a poet, playwright and novelist. Many of his plays have been produced by the Abbey Theatre and his novels include Priest, The Trouble With Sarah Gullion, and Bird In The Snow. He has received numerous awards for his writing and theatre work, including the Steward Parker Award for Theatre,(1990), the Bank of Ireland RTE award for excellence in the arts, ( 1990 ) and the Hennessy Award for short stories. He was Writer in Association with The National Theatre in 1993 , was short listed for the Irish Times Aer Lingus Literature Award in 1989, and was Writer in Residence at Trinity College in 1999.

In an innovative column in the Irish Times he has been chronicling ordinary life in midland Ireland for over a decade through memoir, story, fictions and metafiction, and the project has also evolved into four volumes of best selling memoir; – Staring at Lakes, / Hanging with the Elephant, / Talking to Strangers, / On Tuesday’s I’m a Buddhist. This commitment to story and memory is an all encompassing project to reshape the traditional concept of Seanchas and Dinnseanchas, from the ancient tradition, into a modern mould that embodies contemporary experience and is available on various platforms in diverse media. Michael is a member of Aosdana.

What are my parking options for getting to and from the event?

The Connaughton Road car park is beside The Model. This is a metered daily rate car park and costs €3 per day, Mon-Sat 8.30am-6.30pm

What’s the refund policy? Refunds ar not available for this event.

Do I have to bring my printed ticket to the event?

You should bring either a printed or digital versio of your ticket i.e. saved to your phone or tablet.