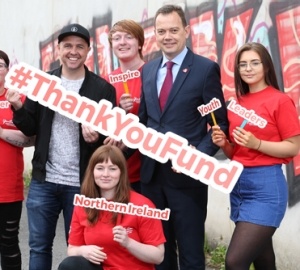 This year, grants totalling €100,000 will be awarded by the Coca-cola Thank You Fund to projects under the categories of education and training, diversity and inclusion in young people, and those with an innovative approach to demonstrating sustainability. This year is going to be a big year for the Coca-Cola Thank You Fund. With the scheme set to hit €1,000,000 in donations to youth-oriented non-profits since it first began in 2011.

When Is The Deadline For Applications?

Applications for funding can be made until midnight on Friday the 12th of July 2019.

Once that deadlines passes, the applications will be reviewed and whittled down to a shortlist of 20. Leaders of those shortlisted projects will then be invited to present their ideas to a panel of judges in September. And, back by popular demand, a ‘People’s Choice Award’ will also form part of the 2019 Thank You Fund. This invites members of the public to vote for their favourite project among the final 20 shortlisted.

When Will The Award Winners Be Announced?

The winners of the Coca-Cola Thank You Fund and the People’s Choice Award will be announced at Zeminar, a three day exhibition focusing on the mental and physical wellbeing of 16-20 year olds in Ireland, which takes place in National Sports Campus in Dublin from 8-10 October 2019.

What Size Of Awards Are Available?

Successful groups receive awards of either €10,000 or €5,000. The Coca-cola Thank You Fund operates nationwide, and it doesn’t matter which county you are from, North or South of the border, your non-profit youth oriented programme can apply for funding.

How Do I Apply?

The application process is fairly straight forward. You apply on line using a simple form and include with your details a fifty word summary in support of the project you wish to enter.