The Minister for Rural and Community Development, Mr Michael Ring T.D., has announced the provision of €500,000 to support the work of Men’s Sheds throughout Ireland.  This capital funding provides small grants to individual Men’s Sheds in order to enable them to purchase equipment or to carry out minor works to improve their premises.

Question 1: Which groups are eligible?

Response 1: Only Men’s Sheds that are affiliated with the Irish Men’s Sheds Association are eligible.

Can you please confirm that only existing groups, currently affiliated with the Irish Men’s Sheds Association are eligible to apply for funding under the scheme?

Response 2: Any Men’s Shed that is affiliated at the time of the closing date of 31st August is eligible.

Can a Men’s Shed apply for funding under the main CEP and also under this fund?

If a Shed is unsuccessful under the CEP scheme do they need to fill out a second application under the Men’s Shed Fund?

No. Any unsuccessful applications by groups affiliated with the Irish Men’s Sheds Association under the main CEP should automatically be considered under the Men’s Shed fund. They do not need to fill out a second application, unless they choose to do so or unless they want to apply for a different amount or different project.

The Work of Men’s Sheds 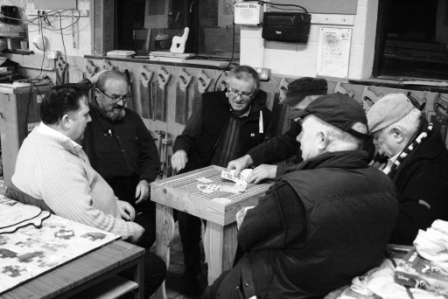 Speaking at the announcement of the funding in Claremorris  Minister Ring said: “The emergence of the Men’s Sheds in recent years has been an extremely positive development for communities across Ireland and I have decided to introduce this funding in recognition of the wonderful contribution they make at a local level.

“In towns, villages and cities which I have visited as Minister, I am continually struck by the great work that local groups do in supporting important local initiatives. Among their ranks they have great expertise, experience and know-how and make a massive contribution to their local communities.

“For example, in Claremorris Men’s Shed, which I visited today, the members were very involved in providing stewarding and making signage for the Claremorris Darkness Into Light event. They also made scarecrows in their workshop which were displayed around the town during the local Claremorris Scarecrow Festival. I’m aware that many Men’s Sheds support Tidy Towns groups as they prepare their local communities for that competition.

“There are approximately 350 groups which are affiliated to the Irish Men’s Sheds Association, and I would like to see as many of them as possible avail of this funding. It is up to the individual groups to submit applications to their Local Community Development Committee (LCDC) in order to avail of the funding and I urge them to do so by the 31 August deadline. Application form above.

“Men’s Sheds offer a safe, comfortable and inclusive environment where men of all ages can share skills, work on meaningful projects and connect with their communities. The funding is being provided following discussions with the Irish Men’s Shed Association. I have asked them to provide details to their members over the coming period on how to apply. I encourage all eligible groups to avail of the support and I wish the Irish Men’s Shed Association every success as it grows and develops.”

Barry Sheridan, CEO of the Irish Men’s Sheds Association, welcomed the news, stating: “This announcement is the most significant development in the history of Men’s Sheds in Ireland, and we as an Association are delighted to have played a role in bringing it about, via our consultations with Minister Ring’s Department. This level of support reflects the impact Sheds are making on communities throughout Ireland.

“It’s a tribute to the work of all our staff and volunteers, as well as to every single Men’s Shed member and supporter who has helped make our Sheds what they are today. Minister Ring’s support is opening a new chapter for Irish Sheds, and we look forward to working with the Department through a bright and sustainable future for Men’s Sheds in Ireland.”